TSUKINO PARK (ツキノパーク) was a free mobile application developed by Movic Co. Ltd. for both Android and iOS devices. It featured five mini-games and characters under TSUKINO TALENT PRODUCTION. The game was shutdown at 15:00 (JST) on November 30, 2018. 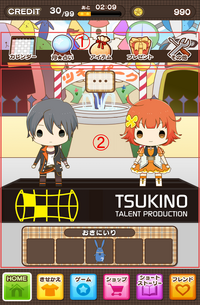 The home screen, also called "My Room", was be divided into two major parts: (1) the upper navigation menu, and (2) the area where the player's chosen character avatars (up to two) were displayed.

The upper navigation menu found only in the Home screen had the following buttons (left to right):

The navigation menu found on the bottom of the screen had the following buttons (left to right): 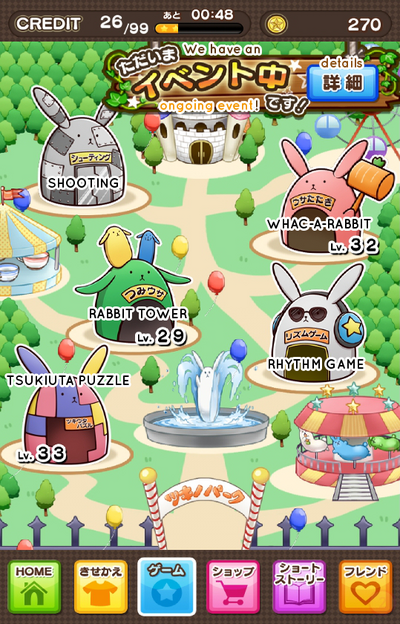 There are a total of five playable mini-games available at TSUKINO PARK. The player's chosen partner, together with the day's support character, have special skills that can be activated during the game. There are several missions to complete per game, with varying levels of difficulty. There are also special monthly events that reward the players with clothes, various items, coins, and experience points.

For more information on the mini-games, click on the specific mini-game area on the image above, or check out the article per game here: TSUKINO PARK's Mini-games.

There were three events the player could choose to participate in every month. For the December 2015 list of events, see here. 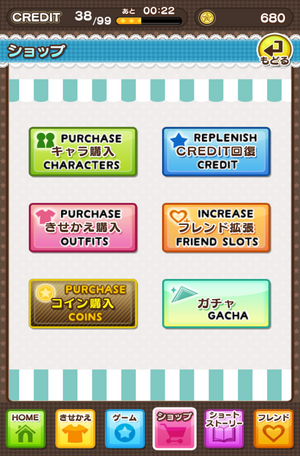 The Shop allowed the player to access areas where they could purchase various items such as new character avatars, outfits/items for their character avatars, and in-game coins, replenish credit, increase friend slots, and the gacha.

The accessible areas were as follows (left to right, top to bottom):