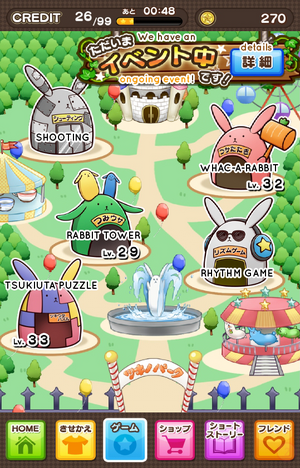 The Whac-A-Rabbit (ウサたたき, Usatataki) is one of the five mini-games in Tsukino Park. The mini-game can be accessed by tapping on the pink rabbit with a carrot-themed hammer, found on the top right area of the screen.

Whac-A-Rabbit follows the standard Whac-A-Mole system where the player has to force the rabbits back into the holes they appear from to earn points, all the while avoid hitting the human characters that appear from the holes as well.

There are six types of rabbits:

Collecting all the letters for FEVER activates Whac-A-Rabbit's FEVER Time, where rabbits holding placards with scores written on them will appear out of all the holes on the screen, and the player can hit these rabbits within the given FEVER Time. Scores written on the placards change, ranging from 100 to 1000.

A list of the missions is currently under construction.

Retrieved from "https://tsukiuta.fandom.com/wiki/Tsukino_Park/Whac-A-Rabbit?oldid=9436"
Community content is available under CC-BY-SA unless otherwise noted.